Considerations for Garage Reconstruction and a Few Tips

Garage reconstruction can be  a lot of fun when it’s done with your goals in mind.  The garage is one of the important spaces in your house and the best part is that you can use it for more than just storing your cars. You can actually convert it into a living, breathing space. It’s a way to expand your living space without having to look for a second home. A two-car garage almost adds about 600 ft2 to your living space. That’s quite a lot of space and it’s up to you to utilize it well.

You’ll typically spend way less than if you were to construct an additional living space from scratch. If you have enough space to park your car elsewhere and not be worried about it, the garage expansion idea may well be worth all of the effort you’re putting in. Neighbors may or may not approve of your decision, but that’s a totally different story.

Your garage is already there as we mentioned, and you don’t need to worry about laying a foundation, erecting walls, and placing a roof over it. Just get to spring cleaning and work out a plan for how you want your garage to be used. The costs involved will typically be halved than if you were to build a separate extension to the house. The efforts may also be reduced as you don’t have to start building a separate space from scratch.

Your garage’s new features incorporated well within your plan will have the major chunk of your costs. A two car garage, for instance, would cost anywhere from roughly $20,000 to $50,000 to convert into the living space of your dream. That’s quite reasonable compared to building a separate living space.

From there, the more amenities you add, the more the costs become. For example, if you’re adding a bathroom, you’re almost spending $15,000 to $20,000 more on uplifting your two car garage space.

What Do you need to Consider for Garage Reconstruction?

Converting a garage is not as easy as it sounds. It does take a certain amount of patience and dedication to get the garage that you actually wanted. A good quality conversion might take anywhere for 4-8 weeks depending on the scale and extent of the conversion.

A few considerations that you may want to keep in mind include:

Photo eyes or photoelectric sensors deploy a laser beam across in a horizontal line from one end of the garage door to the next. If anything obstructs the laser beam by blocking its path, the garage door will refuse to close. This is a safety feature deployed to prevent any mishaps or accidents from occurring to people who happen to be standing directly beneath the garage door. After all no one wants to get crushed under the weight of 400 lbs of solid steel. Photo eyes are usually placed 4 to 6 inches above the ground and it is common for dust, dirt and other particulate matter to clog up the sensors. Often times, performing maintenance of the photo eyes is as simple as cleaning with a towel or piece of cloth.

Why Insulation is Important

There are some pretty great ideas for what you can actually do with your garage. You can partially upgrade it to fit your car and make it a more organized storage space for all your hobby and household equipment. You can also build it up into a hobby shop that allows you to work on other DIY projects that put you in the zone. Or you can make it a man cave equipped with a large screen TV, a home theater system, a minibar, darts, a pool table and a few sofas.

The fact of the matter is that it’s a very convenient and useful space if you decide to put it to good use. But when winter comes around, it becomes really inhospitable and cold to use, and you need to put your plans on ice, literally. That’s why insulating your space is a great idea.

Here’s why insulation becomes important if you plan to use your garage.

Insulating the Joining Wall to Reduce Fluctuations in Temperature.

If you don’t plan to spend much time in your garage and are just organizing it better, you may just want to have insulation where it counts. The whole garage need not be insulated fully. The house is joined to the garage at a particular wall. If you haven’t opted to tear it down to build your garage up as an extension, it might be worth putting a few bucks into the insulation of that wall.

The wall may become excessive cold in the winters and raise your energy bill for the whole house. To prevent that from happening, it is important that you insulate that wall. That way your home will not be subject to fluctuating temperatures that make your HVAC work overtime.

If your home experiences a range of separate temperatures, you can have greater humidity and moisture indoors and no one likes that in the summers.

Your Garage will be Pleasant Throughout the Year

Better insulation means better regulation of indoor temperature. In the summers, you will not have the problem of feeling extremely hot and sweaty in your newly transformed garage space because cooling won’t go out the front door. That same door will allow you to have a warmer indoor winter so you can practice your hobbies in peace or chill with the family or friends in your new garage without having that unpleasant sense of cold every time you walk into the garage.

Insulating your walls will trap the heat inside and allow the temperature to be pleasant regardless of the season.

Attached Garages Benefit from it

Attached garages need to be insulated as they can steal the heat from the house. If they are not very well insulated, you can expect to have a lot of heat drained from the garage itself. This makes it more difficult to heat up the rest of the house. Again, this impacts the energy bills as they skyrocket along with your stress level.

With proper insulation for the attached garage, you can rest assured that the heat will stay in where it’s supposed to in the winters and out during the summers. You can also make a recovery for the insulation costs when you see a drastic reduction in your energy bills over time.

Making Your Garage a Greener Place

This can go both ways. Your garage can have a number of indoor plants if you have decided to give it a makeover. When you allow for greater sunlight to enter the garage through new windows, you can also stand to place more greenery inside. Yes, you can place indoor plants strategically wherever light enters and stays. Not only can you make your garage more vibrant and habitable for yourself, your family and friends, but can improve the quality of your indoor air.

A greater amount of oxygen will allow the air to feel cleaner. If you decide to build an indoor gym with a treadmill and a few weights thrown about, indoor plants will provide you with that much needed closure with nature.

The other way that you can make your garage greener is to make it eco-friendly. You need to treat your garage with the same careful and dignified treatment that you give to the rest of your house. We have already touched upon how insulation and a new garage door can reduce your energy costs, but there are some other ways that you can reduce your carbon footprint through your garage. This is irrespective of whether you use it as a storage space for your car or make it a welcome addition to your living space.

Ever Thought of Solar Panels?

If you can afford it, you can do it, right? Solar panels may be worth it in the long run. If you find out that your home is correctly positioned for the sunlight to fall directly on your roof, you should certainly try to aim for solar panels. Your finances may also be able to cover it. This will save your electricity bills considerably as you will not be using the power supplied to you via the grid. You’ll be using a renewable source of energy, and fulfilling your duty towards your environment.
Find out how Garageworks can help insulate your garage door! 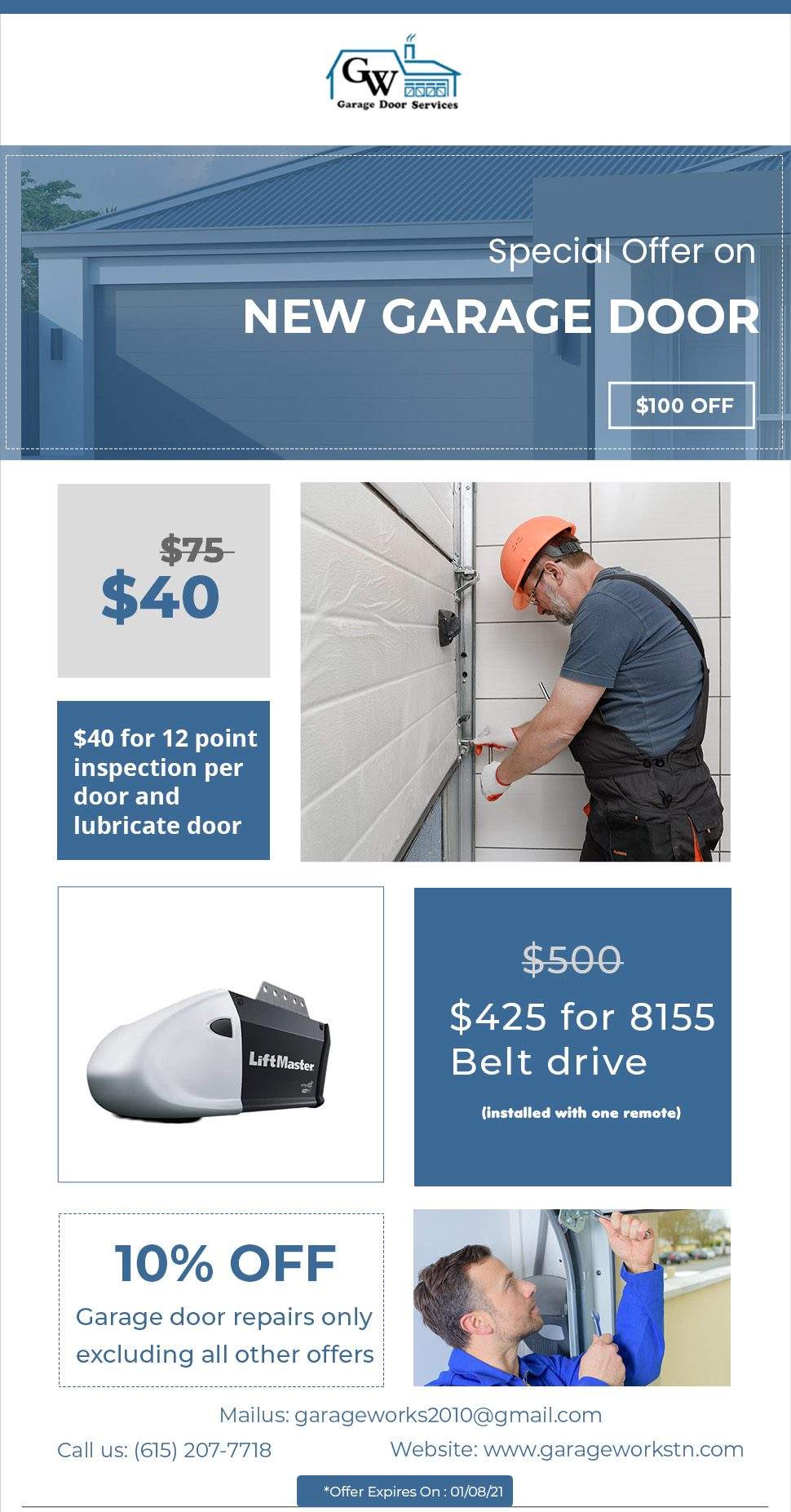